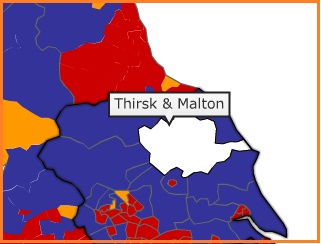 Electors finally go to the polls today in the final seat of the 2010 general election where voting had to be put back from May 6th after one of the candidates died.

So even if, as is likely, turnout is not at general election levels the white gap above on the BBC election map above should be safely coloured blue at this time tomorrow. But….

A large part of this newly-created seat was in the Ryedale constituency – scene of a 1986 Lib Dem by election victory. Also the sitting Tory MP, as the Telegraph has been reporting, was featured in last year’s MPs’ expenses probe. Anne McIntosh had claimed more than Â£5,000 between 2004 and 2008 for gardening bills as well as for mousetraps and mouse poison

On top of that the UKIP candidate has sought to highlight Ms McIntosh’s expenses during her time as an MEP.

According to the paper she has now responded by accusing her Lib Dem challenger and his wife of claiming Â£40,000 in allowances as local councillors.

Whatever I think that alongside a number of PBers I’m going to be several hundred pounds richer from a bet that was tipped here on Sunday. SportingIndex asked us to predict the outcome in a handicap market with 19,000 votes being added to the Lib Dem and Labour totals.

The experience of a similar deferred seat from the 2005 general election is that turnout will be right down and it’s going to be very difficult for Ms McIntosh to even get 19,000 votes.