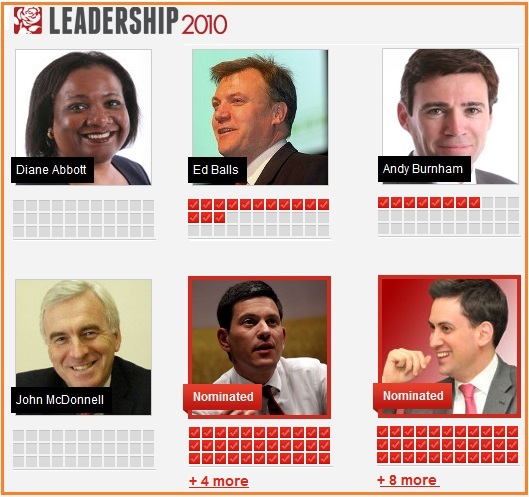 Is Ed putting the early pressure on his brother?

Twice a day the Labour party is revising the nomination totals for each of the six hopefuls who have declared that they are running.

What’s been marked is the way the Ed Miliband campaign managed to get its slate of the required 33 in ahead of the others and how they are continuing to add to the list.

I wonder whether we are seeing fierce sibling rivalry with the younger Miliband being totally resolved not to be outshone by his elder brother.

The aim seems to be to create the sense of momentum that will encourage other MPs to join the Ed M band-wagon.

This has forced the David Miliband campaign to get its skates on and ensure that their man, too, had passed the threshold by the time this evening’s totals were announced.

Some way behind now are Ed Balls and Andy Burnham with Abbott and McDonnell still to record a single formal nomination.

I’ve extended my betting position on EdM this afternoon.