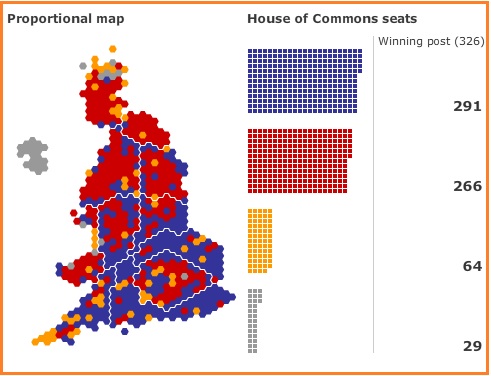 How the blues beat the uniform swing

In the high-octane political atmosphere following the May 6th election we never looked back to to check out what had been a contentious issue on PB for months beforehand – how the uniform national swing would operate.

Above is what happens when you feed the GB votes shares on CON 36.9%: LAB 29.7%: LD 23.6% into the BBC’s swing calculator. Assuming the outstanding seat goes with last time then the Tories were sixteen seats ahead of the UNS projection with Labour Labour eight short and the Lib Dems off by seven.

It’s hard to see how in this context that Clegg’s party could have adopted the route that they did. A Labour minority would have been a probable outcome. Certainly Brown would have not felt the need to resign so quickly

What I found quite striking during the election was the blind faith that many commentators seemed to have in the UNS – it was reported as though it was some natural law.