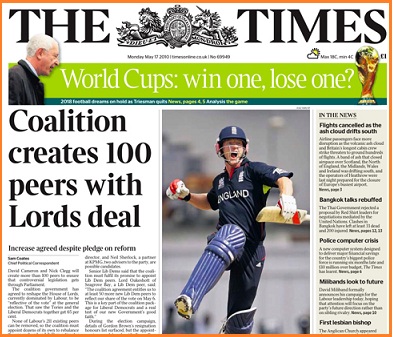 Will this be the coalition’s first big PR test?

It’s hard to dispute the political logic of this morning’s main story in the Times – Cameron and Clegg are going to need to create scores, maybe well in excess of 100, new peers simply to ensure that legislation gets through the upper house.

As the paper notes: “None of Labourâ€™s 211 existing peers can be removed, so the coalition must appoint dozens of its own to rebalance the upper chamber. Lib Dem estimates suggest that the number of Tory peers would need to rise from 186 to 263 and Lib Dem peers from 72 to 167..”

That’s a massive expansion all at one go and one that could be tricky to manage, especially in view of the anti-politician culture that has pervaded since the MPs expenses scandal.

For the appointments are all part of the patronage that Cameron and Clegg now enjoy and until the House of Lords is reformed the system will remain.

The problem is that this just does not look good and you can see it fuelling the ferocious anti-coalition rhetoric that’s building up in papers like the Daily Mail.

It also provides some useful ammunition for Labour to attack the new government just as the party is trying to pick itself up.

For oppositions need issues to get themselves heard and this looks like a good one.