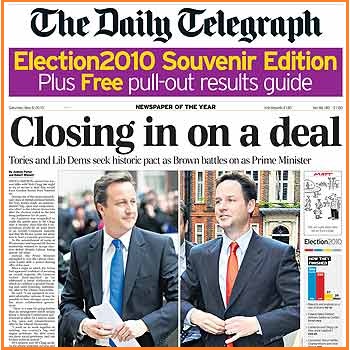 More than a day after the polls closed and still weâ€™re barely any nearer knowing who will form the government as a result of yesterdayâ€™s election. The negotiations between the parties arenâ€™t just a numbers game – complex enough though that is – theyâ€™re also a battle for legitimacy in the public mind.

A Populus poll for The Times sheds a little light on that, with the three options put (Tory minority government, Labour continuing with Lib Dem support and a Con-LD coalition) all receiving similar levels of support, with each close to evenly split.

Itâ€™s difficult to know quite how seriously to take these figures. Itâ€™s a small sample and English voters (who will make up the great majority of respondents) are not all that used to coalitions. Their expectations and the reality of a hung parliament may well differ. The support for each option also looks to come in the main from the party that would form the government so they may come closer to reflecting party support rather than an unbiased consideration (and also perhaps why the three options produce similar responses).

If public opinion is open to persuasion, it certainly gives each party much more room for manoeuvre. Negotiations against a backdrop of a hostile public are almost certainly doomed to fail as theyâ€™d be both detrimental to the partiesâ€™ support and could well hasten a rapid second election – an unappealing combination. The case has to be made not only in terms of mandate but also programme: why would the voters who supported one party benefit from that party putting another into office?

Clegg is now on record as regarding the Conservatives as having the greater mandate and the number of MPâ€™s makes this an easy choice: even a Lab/LD coalition wouldnâ€™t have a majority (though it would have more than the Conservatives alone). That doesnâ€™t necessarily imply a coalition though. Both parties may find it in their interests to keep their distance, once the incoming government has given assurances about, for example, the contents of its Queenâ€™s Speech.

One aspect which will may help to win the public over to whatever the Lib Dems decide is their democratic but cumbersome mechanisms to approve a deal. That will almost certainly generate interest and comment in the press and in other political parties. The issues will be aired and the public will be likely to know what theyâ€™ll be given.

What happens if that fails? Itâ€™s really not a pleasant scenario. Brown could then try to form an agreement with the Lib Dems but even if Clegg were able to paint the Tories as having been unreasonable, once the argument gets to the level of coalition negotiations it will just look like political infighting and maybe irresponsible.

Backing Labour would run against the grain of the election and the spirit, if not the letter, of the Lib Dems pre-election comments. Alternatively, Brown or Cameron could try for a minority government without Lib Dem support but thatâ€™s just an election waiting to happen and that uncertainty would be poorly received by the money markets. The imperative really is to conclude a deal.

This, I suspect, will be one occasion when the polls will follow the politicians rather than the other way round.