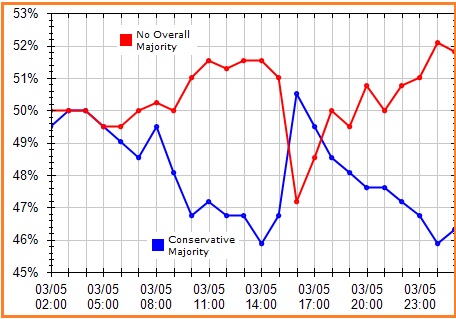 Does it all depend on the Yellow-Blue battles?

If this was a straight fight between the Tories and Labour then there would be a strong case for saying back a Tory majority. The polls seem to be suggesting that the blues are doing well enough in these encounters to win.

But in three other groups of seats it’s hard to come to that conclusion.

CON efforts to take LD seats: The latest polling, by Crosby-Textor, for the Telegraph suggests that the Tories are going to come away from these battles empty-handed. Where Clegg’s party hold the seat the tactical message to Labour supporters is unambiguous and LDs look set to hang on.

LD efforts to take CON seats. All the current polls suggest that there has been a swing from the Tories to the Lib Dems and the yellows might pick up a few prizes on Thursday. The scale of success here could be dependent on Labour tactical voters and whether they get the message that voting yellow is the best way of stopping the blues. Clearly any blue seats lost here have to be made up from gains elsewhere.

Three-way marginals. Here Labour are either incumbents or were in a good position in 2005. The question is whether their supporters still think that they are in with a chance or whether switching to Clegg’s party would boost their chances of stopping the blues. This is almost totally dependent on the ground campaign but I would expect the LDs to pick up seats like Watford where the Tories are also fighting to take them from Labour.

My own seat of Bedford is in this latter category and I can’t read it. It is possible that that opposition to Labour will be split and this might let the reds back in. I’ve got bets on all three parties – 4/7 on the Tories, 16/1 against Labour, and a 50/1 wager placed nearly two years ago on the Lib Dems. They are now down to 13/8 with some bookies.

The LAB-LD encounters and other seats where the Tories are not in with a chance are irrelevant to the big picture – which is how many seats overall that the blues can win.