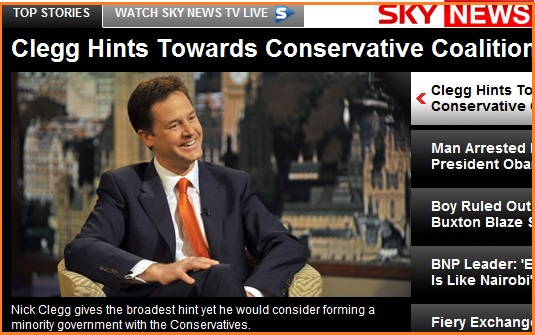 What does this do to “Vote Yellow get Brown”?

In the eleven days since Nick Clegg’s Liberal Democrats emerged as a force at the first debate the blue team’s main line of attack has been “Vote Yellow get Brown”.

Given the ongoing unpopularity of the Prime Minister and the desire for change being shown in the polls this had a lot of potency which would have dominated the Tories’ final week’s campaigning.

That has been knocked on the head by Clegg’s TV comments yesterday and, more importantly, the way it is being reported.

For the LD leader did not exactly say what the headlines are suggesting – he was referring to what could happen if Labour finished up with most seats even if it was in third place in terms of votes.

The move comes after a week when the Tories have made progress in the polls and now, across the board, they have reasonable margins.

So what do the Tories do now? How can they contain the yellow surge? A real problem is the apparent scale of Clegg’s popularity even after a period when all the focus was on him. Just look at the latest approval ratings from YouGov.

These figures are extraordinary even though they are a bit lower than a week ago. We’ve had the warnings on the threat to the currency, the concerted tabloid attack and “Vote Yellow – Get Brown”. Now the latter has been neutralised what do the blues’ say?

My betting view remains – BUY the Yellows on the spreads. The latest SportingIndex figures were 85-88 seats.