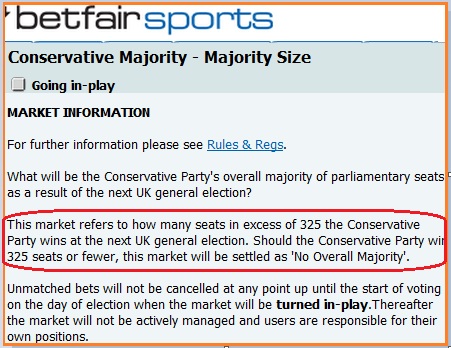 Should this new range of markets be voided?

Thanks to Aaron a couple of days or go for pointing up the wording that Betfair is using to define majority in a new range of markets that have just been put up. The wording used is this:-

“What will be the Conservative Party’s overall majority of parliamentary seats as a result of the next UK general election?

So according to Betfair a Tory seat total of 335 would be a ten seat majority. Wrong – it is actually twenty.

For a majority is the number of seats a party is ahead of all other MPs elected. So if the Tories got 326 seats in the 650 seat house then the rest would have 324 seats. The gap between the totals is two which would be the majority size.

If they got 335 seats then the balance of seats would be 315 resulting in a majority of 20.

So each additional seat they get equates to an increase in the majority size of two.

Betfair should close this down forthwith making all existing bets void. Then they should put it up again with an accurate definition.