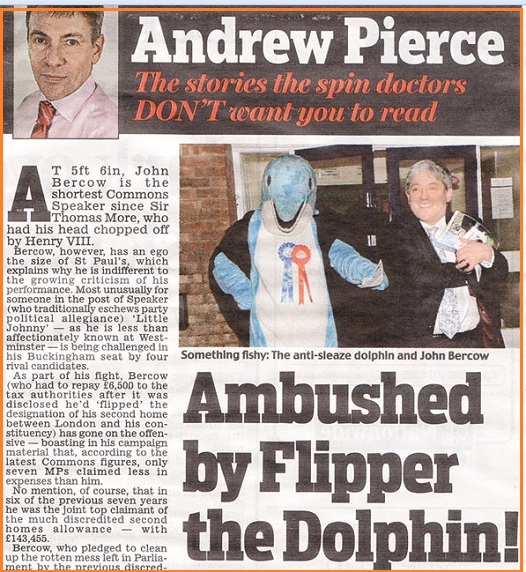 What are his chances in the Battle for Buckingham

This is the “Flipper Dolphin” who is seeking to tail John Bercow wherever he travels during the campaign in his Buckingham constituency to highlight the speaker’s record on expenses.

The purpose is to remind voters that their outgoing MP is what was became known as “a flipper” during the expenses scandal. Bercow is trying to fight back by claiming that he has one of the best records in the house.

This is how Andrew Pierce describes it in the Mail: “As part of his fight, Bercow (who had to repay Â£6,500 to the tax authorities after it was disclosed he’d ‘flipped’ the designation of his second home between London and his constituency) has gone on the offensive – boasting in his campaign material that, according to the latest Commons figures, only seven MPs claimed less in expenses than him.

No mention, of course, that in six of the previous seven years he was the joint top claimant of the much discredited second homes allowance – with Â£143,455. Bercow, who pledged to clean up the rotten mess left in Parliament by the previous discredited Speaker Michael ‘Gorbals Mick’ Martin, also omitted the Â£45,000 of taxpayers’ money lavished on refurbishments to his official apartment since he moved in last summer…”

He faces two opponents – ex-UKIP leader Nigel Farage and the former MEP for the area, John Stevens. The latter has the backing of Bercow’s Tory predecessor in the seat, George Walden, and Martin Bell who won Tatton in 1997 on an anti-sleaze ticket.

Stevens is seeking to make the whole campaign about expenses and is now broadened the attack targeting Farage over the record of his party’s MEPs – two of whom ended up in jail.

To my mind Bercow has made a huge mistake in even trying to defend his record on expenses. That just keeps the issue in front of voters and the Stevens campaign has already shown how ruthless it can be.