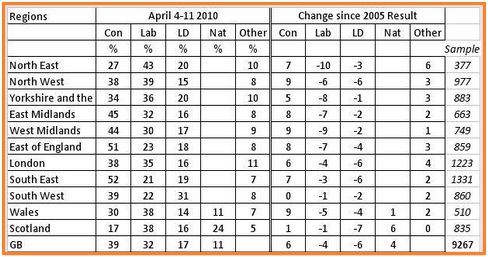 Do the regional splits point to an overall Tory majority?

Above is a table prepared for PoliticsHome by YouGov showing their aggregated data from a week’s polling broken down into the regional splits.

What matters is the right hand block showing the variations from the 2005 result. To work out the swing in a particular region add the Tory plus figure to the Labour minus one and divide by two. Three trends stands out:

In the LAB-CON marginal rich regions of the midlands and the north the swing is much greater than the average pointing to more blue gains.

In the South-West where many of the LD-CON marginals are located the yellow-blue swing is down to just one percent suggesting that’s Clegg’s party will hang on to most of them.

Labour is doing particularly well in Scotland dropping only one point and from this data looks set to retain the lion’s share of its MPs north of the border.

The Tories will also be cheered by Wales where the party lost everything in the 1997 Labour landslide while the Lib Dems will be disappointed by their showing in Scotland.

For those betting on specific seats this is a great guide. Go through the UKPR Tory target guide and apply the swings set out above.

For me there is one immediate outstanding bet – the 10/11 that’s available from Ladbrokes against the Lib Dems winning most seats in Cornwall.

This data is going to be made available every week and it will be interesting plotting the change.