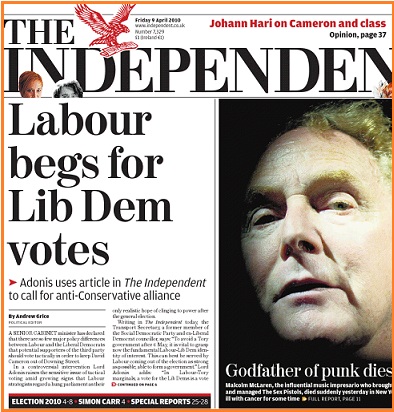 Could his call be counter-productive?

The Indy’s front page features a plea from Baron Adonis, a former Liberal Democrat councillor in Oxford and ex-PPC, to supporters of the party he defected from to support Labour on May 6th in order to stop the Tories.

His first target of supporters of his former party in Labour-Tory marginals because, “a vote for the Lib Dems is a vote which helps the Tories against progressive policies.” That’s fairly standard rhetoric and is central to Labour campaigning.

But does Adonis undermine his case when he goes even further and calls on Lib Dems in seats where they are fighting Labour not to back their allegiance but to vote Labour instead? His reason – “every Labour MP returned is a seat in the Commons more likely to put Labour ahead of the Tories and therefore better placed to form a government”.

And what do Lib Dems get in return? The Baron is silent on what Labour voters should do in LD-CON marginals.

It all smacks a bit of desperation and, really, is now the time to be raising it? Surely this should be part of the final week campaign when electors are more focussed on voting? His reference to LD-LAB marginals is hardly going to endear him to those he is seeking to influence and he’ll be seen as a threat.

Given how crucial Lib Dem tactical support is to Labour then it needs to re-think its approach.