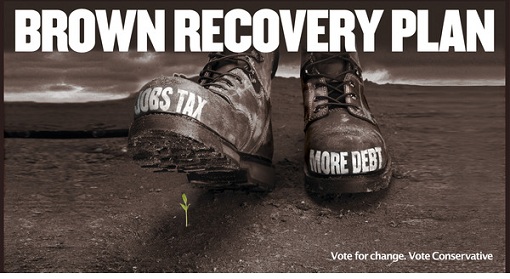 Should they be taking the focus off Brown?

Posters are coming out at such a rate at the moment that it’s hard to keep up. This one from the Tories is trying to build on the perceived advantage from last week over the NI tax move.

It’s theme is very much the same as the famous 1992 “Double Whammy” poster that was said to have been so successful. I’m not totally convinced of the visual portrayal.

To me it’s good at this stage to get straight into policy divisions rather than attacking the other side’s leader – which seems to have been the hallmark of this campaign so far.

The bigger message, surely, is that the Tories have a much bigger war-chest than Labour are we are starting to see that advantage.