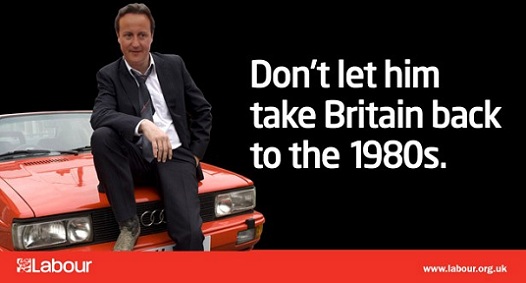 ..or is featuring Cameron an own goal?

This is Labour’s latest ad – the much-hyped one that was designed by a 24 year old supporter from St. Albans.

I don’t think that people will immediately get it. Those who were adults at the start of the 80s are now in their fifties and is there a widespread sense that the decade was an awful one for the country in the way that poster tries to suggest?

But the mega-mistake is to feature the Tory leader. All the polling shows that he’s more popular than his party – so Labour is highlighting one of its opponent’s biggest assets.

The poster also reinforces the notion that is a presidential-type election where all the emphasis is on the leaders – the last thing that they should be doing. For in that battle the numbers point to the blue team being a long way ahead.

Labour have to put the focus on those parts of the Tory party who are not “on-message” with the leadership but they have an obsession with the Tory leader that could be undermining their campaign thinking.

I've just had a Tory mailing of a letter above the signature of George Osborne. The letter's first paragraph has Osborne saying that if his party wins the election "David Cameron has asked me to be Chancellor of the Exchequer". Really? Is that supposed to be a positive?