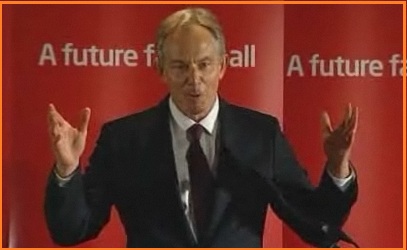 Should you bet on him becoming Sir Anthony?

In something of a novelty market from William Hill, theyâ€™re asking whether Blair will get a knighthood during 2010. As they put it,

Former Prime Minister Tony Blair is campaigning for Labour again and as a result William Hill are offering 10/1 that he will be knighted this year.

Is that worth taking? I donâ€™t accept Hillâ€™s thinking – I donâ€™t believe for a moment Blair is campaigning because he thinks there might be an honour in it for him. For a start, were it true, it would imply that he is little better than Brownâ€™s marionette, willing to jump for the right price.

Leaving that to one side, the precedents suggest that the odds are quite finely balanced. All the post-war Prime Ministers received a knighthood with the exception of Harold Macmillan, who didnâ€™t accept any formal honour until he was ninety. The rest were generally offered them shortly after retirement and clearly Blair hasnâ€™t had his yet.

The usual award is that of the highest order, a Knight of the Garter, which is limited to 24 members but where there is a vacancy. New members are announced on St. Georgeâ€™s Day so this could be quite a quick market to pay out. The likely coincidence of that date with the general election campaign doesnâ€™t help Blairâ€™s case but Jim Callaghan received his in 1987, only just before that yearâ€™s election was called.

Even so, before and during are two different things and the Queen – who does have a say in Garter awards – will want to avoid any potential controversy, so the 10/1 looks about right to me.

Whether Blair is receiving any counter-pressure to accept or press his case from the would-be Lady Cherie, one can only guess.