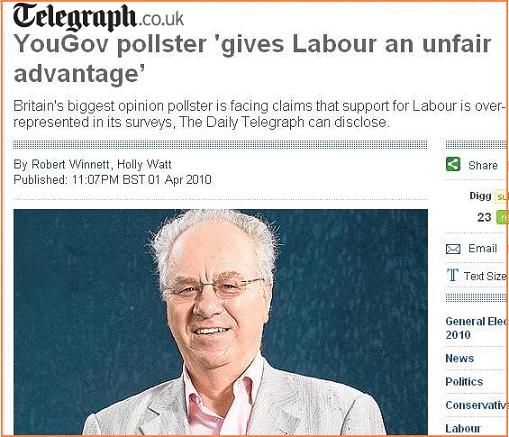 Is all it down to new invitation methodology?

There’s a big piece in the Telegraph this morning raising issues that have been discussed at length on PB in the past few weeks – whether Britain’s biggest political pollster, YouGov, is over-stating Labour.

The Telegraph, it should be noted, was the online firm’s first major media client – an arrangement that came after the paper switched from Gallup following the 2001 general election. That continued until two months ago when, as I understand it, the firm signed an exclusive deal for national newspapers polls with New International.

In order to meet the demands of the new daily poll that started in February the firm changed the way in which members of its polling panel are invited to take part and this might have impacted on the nature of the responses.

The old way of sending out invitations with a specific deadline has been replaced with one that is open-ended. The idea then being that the daily results are based on the questionnaires returned in the previous 24 hour period.

The aim was to deal with the huge peaks and troughs experienced last September/October when the firm launched a prototype daily poll.

One consequence, the reason for which I cannot fathom, was that far fewer panellists identified as having a “loyal Labour” ID were responding. This meant that the views of those who do have to be scaled up in order to meet each new day’s quota – hence the imbalance between the weighted and unweighted numbers highlighted by the paper.

So it sometimes appeared that the fewer Labour loyal panellists who took part on a specific day the better the numbers were for Brown’s party. Could it be, I wondered, that they were more enthusiastic and therefore less representative?

There’s been one YouGov poll over the past weeks that has really stuck out – the survey for London ITV that came out last week and reported an 8% swing to the Tories which was way out of line with its national polls at the time.

I checked with Peter Kellner and discovered that the old method of invitation had been used for this poll and the data showed that there had been no problem meeting the Labour loyal quota.

This leads me to wonder whether YouGov’s new invitation methodology is an issue. I think that that needs to be looked at which, knowing the firm, I am sure it will be.

For, like the other nine pollsters in this increasingly over-crowed field, the paramount objective is getting the general election as near to right as possible. Their reputations depend on it.