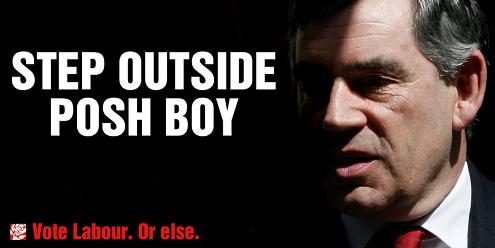 I was nearly had. I was just about to do a post on Labour’s apparent new election strategy when it twigged – today is April 1st.

This is how the Guardian describes Labour “new” approach:

“In an audacious new election strategy, Labour is set to embrace Gordon Brown’s reputation for anger and physical aggression, presenting the prime minister as a hard man, unafraid of confrontation, who is willing to take on David Cameron in “a bare-knuckle fistfight for the future of Britain”, the Guardian has learned.

Following months of allegations about Brown’s explosive outbursts and bullying, Downing Street will seize the initiative this week with a national billboard campaign portraying him as “a sort of Dirty Harry figure”, in the words of a senior aide. One poster shows a glowering Brown alongside the caption “Step outside, posh boy,” while another asks “Do you want some of this?…”

Maybe it’s because I had slightly too much at last night’s PB party but I was taken in for a few minutes because portraying known weaknesses as a strength is a well established tactic. It was, however, this in the report that gave it away.

“One tactic being discussed involves provoking a physical confrontation at one of the three ground-breaking TV debates between the candidates. In this scenario, Brown, instead of responding to a point made by Cameron, would walk over from his microphone with an exaggerated silent display of self-control, bring his face to within an inch of the Tory leader’s, and in a subdued voice, ask “what did you just say?”, before delivering a single well-aimed blow to his opponent’s face, followed by a headlock if required.”

Good stuff as we go into the holiday weekend before it all begins.