Is it all down to the colours of the current FA cup holders? 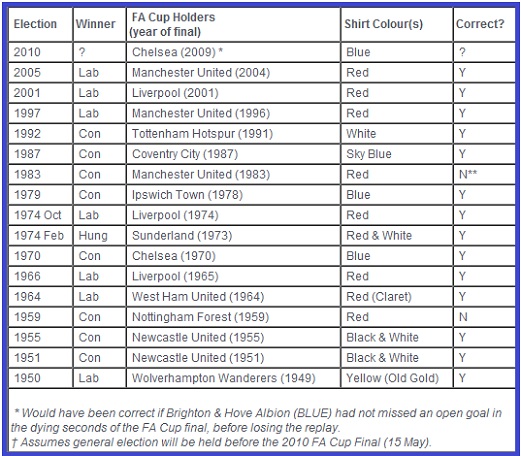 Thanks to Roger Mortimore of Ipsos-MORI for coming up with this fun approach. He wrote:-

“….All you have to do to predict which of the major parties will have an overall majority in the Commons following the election is to note the shirt colours usually worn by the current holders (on election day) of the FA Cup.

If their shirts are predominantly in the Conservative colours of blue or white, a Conservative victory will ensue; on the other hand if the predominant colour is red or yellow, Labour will be successful. (Black stripes are ignored.)

…. the sensitivity of the prediction method is demonstrated by the election of February 1974, which produced the only post-election hung Parliament since the War â€“ that election was fought when the cup holders were Sunderland, whose striped shirts are red and white in equal measure….

…And what about the 2010 election? If it is held on the date that most pundits expect, 6 May, then the 2010 Cup Final will still be in the future and the cup holders will still be the 2009 winners â€“ Chelsea, once more. So that would indicate a Conservative overall majority. But if Gordon Brown were to ignore the convenience of holding the general and local elections on the same day and hang on until after this year’s Cup Final on 15 May, perhaps he still has a chance. True, the odds are still stacked against him, as three of the four semi-finalists play in white or blue; but Aston Villa, whose shirts are predominantly a shade of red (claret, to be precise), still offer him some hope…

…One thing’s for sure, though, all this talk of a hung Parliament is misplaced. The last chance of that disappeared when Stoke City (red and white stripes) were knocked out in the quarter finals!