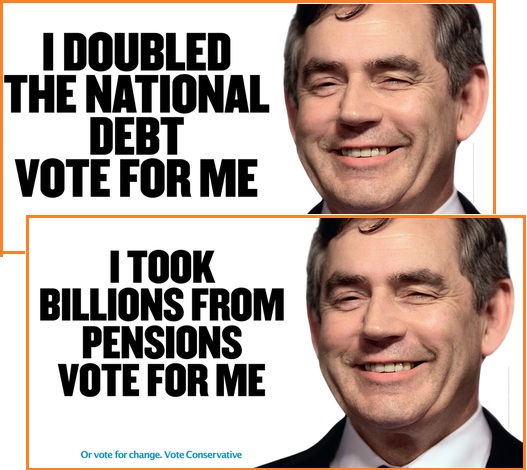 Would they be doing this now but for the polls?

The ads above are the first from Tory party’s new releationship with M&C Saatchi who, now doubt, have done a lot of research on what images of the PM most suit their purpose.

It was inevitable that at some stage during the camapign that the Tories would play what they believe is their strongest card – Gordon Brown’s unpopularity.

For even during the recent Labour recovery in the polls the approval rating gap between Brown and Cameron has remained large and the latest polling suggests that it is getting a touch wider. The only PM ever to go into an election with this level of unpopularity and win was Tony Blair in 2005 – but he was facing Michael Howard who had even worse numbers

The questions are whether this treatment is right and, more importantly, whether going negative on Gordon should have been something that was held back until the final days.

For it’s only in the closing stages of a campaign that the majority of electors start taking a close interest and that is the time surely to play your strongest card.

Assuming that Brown doesn’t decide to stretch it out to the last possible day, June 3rd, we are still just under six weeks from polling day and it’ll be hard trying to sustsain an anti-Brown campaign for all that period.

As to the posters themselves the couple I’ve reproduced seem fine. Of the others I am less convinced. We have “I let 80,000 criminals out early“; I doubled the tax rate for the poor; I lost Â£6 billion selling off Britain’s gold; I caused record youth unemployment; and I increased the gap between rich and poor.

The Tories are trying to make the election a refrendum on Brown – Labour will try to make it a referendum on Cameron.

Sit back folks and enjoy the ride.