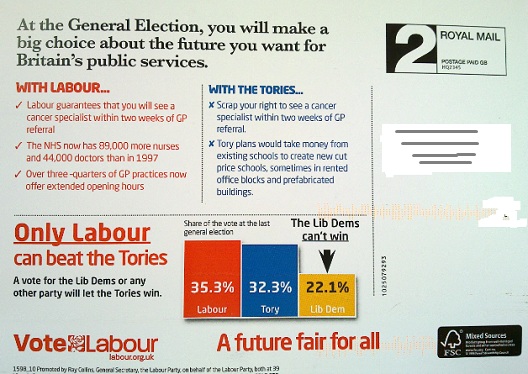 Who’ll be the most “creative” with the use of numbers?

With tactical voting looking set to play a crucial and possibly decisive role in the coming battle this could be the general election of the bar chart.

These are deployed by campaigners of all colours to persuade supporters of other candidates in specific seats that their choice does not stand a chance and that they offer the ONLY WAY OF BEATING/STOPPING XYX in that constituency. Mostly the appeal will be to block the Tories or Labour but the BNP could figure as could prominent troughers who’ve decided to try to secure re-election.

So over the coming weeks expect to see a deluge of bar charts of one form or another as local campaigns hustle for position.

We are going to see numbers and other apparent electoral facts, including betting odds, distorted in amazing ways testing the creativity of campaigners to the nth degree. We are also going to see some pretty naff efforts.

All of these are of interest in the PB competition – just send them in so we can look at them and by polling day have our own election on which is the best/worst/most naff etc.

The one above is from a postcard that cash-strapped Labour is mailing to Lib Dem supporters. Trouble is that they couldn’t be arsed to work out the local numbers – but chose the 2005 national ones instead. The message should be, surely, is that only XYZ can can beat ABC HERE.

So send them in to me here at Politicalbetting. We’ll have updates, voting and all sorts of things as we get close to the big day.