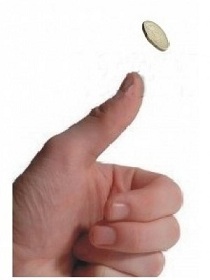 Academics make electoral forecasts that differ from those of poll-watchers. First, we use historic data and statistical methods to make our predictions, not simply the latest polls. Second, in addition to accuracy, we also want to learn something about the fundamentals that move voters and decide elections. Third, we want to know more than how people would vote if an election were held today – we investigate where the electorate is going and where it will be on election day.

For us, a good forecast is accurate – preferably over multiple elections – and provides a good amount of lead time. Early forecasts are judged against the results, rather than looking at the closeness of the last polls of the campaign. We aspire to give an early forecast with a margin of error smaller than election-week polls.

The forecasting model developed by my colleague Helmut Norpoth and me is one of several by academics making the rounds this election season. Slides and the complete paper are available here: http://ms.cc.sunysb.edu/~mlebo/ . To predict the vote, we use the history of party swings in elections since 1945 as well as the impact of the PM’s satisfaction rating. This gives us a prediction of where the electorate is headed, rather than choosing the current poll we trust most and then hoping it holds out over the final weeks of the campaign. 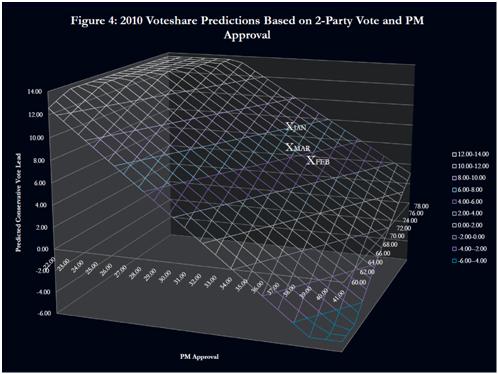 Using election results and public opinion data on PM approval gives an equation to predict 2010. It is summarized in the first figure. The graph itself was determined by the model the moment the 2005 results were known. However, we waited until 2 months prior to the 2010 election to determine where X goes. A given value of total vote intentions for the major parties and the value of PM approval determines the predicted vote. Nowhere in our model is the relative share of vote intentions for Labour and the Conservatives. Using January polls, the model predicted a 6.9% lead for the Tories. Brown’s rise in approval in February led to a revised 3.4% Conservative vote lead. Using a combination of polls from then and this Monday, the estimate is a 4.3% Tory lead.

Next, we feed the predicted 4.3% lead into a model that translates votes into seats. To predict the distribution of seats, we study the statistical trends in this translation since 1910. Our method allows some, but not all, of the bias in the electoral system to carry over from election to election and, from 1910 to 2005, makes closer predictions on average than relying on some “uniform swing.” Much of the bias in the electoral system from 2005 will still be present in 2010 and a 4.3% Conservative lead predicts a near dead-heat in seats.

Our vote forecast of a 4.3% Tory lead translates into a prediction of 287 seats for Labour and 285 seats for the Conservatives. A hung parliament. A coin toss for the largest party.

Of course, being just right well in advance would be an impressive feat. Uncertainty exists and we quantify it to estimate the likelihood of various outcomes. Uncertainty comes from several places: the PM approval value, the impact of PM approval on votes, the historic movement of seats, and the translation of votes into seats. Allowing for uncertainty, we simulate elections under the many ways the model could truly work and the many values our data could hold. So, we simulate 1,000,000 elections under various conditions that could exist in our model and in our data. The results of these simulations tell us about the probabilities of different outcomes.

The Conservative seat lead figure covers the relative party fortunes. Anything to the right of zero, 47.7% of the simulations, indicates a Conservative lead in seats. That is, even with a prediction of a 4.3% vote deficit, the model predicts a 52.3% chance that Labour will hold onto a lead in seats.

Still, the chances of a Labour majority are very small (1.33%). The range that can give a hung parliament is wide and our distribution is smack in the middle of it meaning that the probability of a hung parliament (94.2%) is near its maximum. Any change in Gordon Brown’s popularity will drop this number substantially.

What are the potential problems for our forecasts? The accuracy of the PM satisfaction values is not a principal worry – MORI and YG are in fairly close agreement and we are most interested in comparing them to previous polls by the same firms not to other firms like ICM who sample differently and the ask the question differently than all the polls since 1945 we use in the model.

More worrisome is our model’s omission of the popularity of the Opposition leader. This has not been a problem historically for our model, but if Mr Cameron proves to be uncommonly more popular than the PM (think 1997), we could be under-predicting Tory support. Also, Mr Brown’s gains of late could dissipate. Lastly, our model is based on a very small sample – 17 elections for the vote and 26 elections for seats. Economists usually make their forecasts with hundreds or thousands of data points and still have great difficulty. Will we do better than they typically do? We’re betting on it.