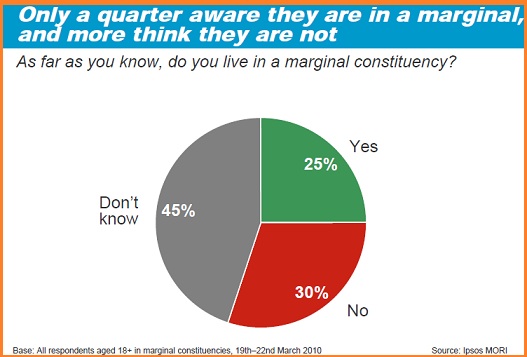 Will voters act differently if they know?

Just catching up with the latest MORI poll of the marginals which came out just as the Matt Lebo thread was starting.

The survey took place in seats where Labour held leads of between 10% and 18% at the 2005 general election and the poll topline of C37-L41 represents a 5% swing to the Tories. With marginals’ polls you always have to look at the baseline from last time and work back from there.

So compared with this month’s MORI monitor this represented a swing one point bigger than the national number reinforcing the point that the Tories are doing better in the critical battle-grounds.

But the finding I found most interesting was the one above – the small proportion of voters living in the marginals who are aware of the fact. This seems quite remarkable because of tactical voting.

Voters are more likely to switch to another party if they think it could make a difference in their seat – and if they aren’t aware of the local situation then the chances of them doing so are probably less.

The poll recorded a 4 point share for UKIP in these seats – a segment that could possibly boost the Tories while the Greens were on 3 points.

To my mind this election is about the extent that supporter of the parties other than the Blues or the Reds can be persuaded to switch on the day in the key seats and which way they go.