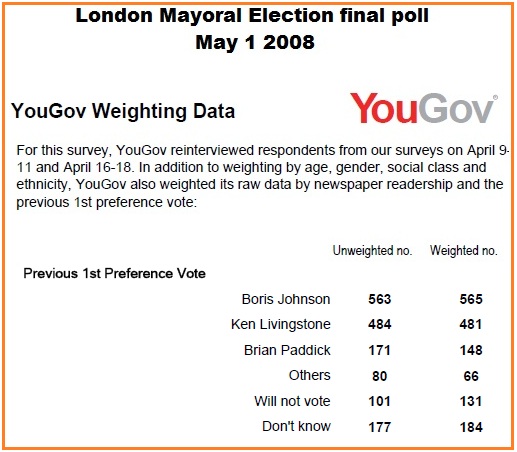 But was it based on a different weighting structure?

Nobody can dispute that Boris Johnson’s election as London mayor on May 2nd 2008 was a sensational achievement for YouGov. For the second mayoral election in a row they got the final result correct to within one percent at a time when they were completely out of line with all the other pollsters.

I, for one, made a fair bit of money betting on the YouGov view of what was going to happen in the capital rather than the other firms which carried out polls.

There is little doubt that much of YouGov’s reputation derives from that success so I thought I’d dig out the details of that amazing poll and discovered something that I had not noticed before – it had been based on a bespoke weighting approach for that poll and that poll alone.

For what the firm did was to go back to previous respondents to earlier mayoral surveys and then weight according to the the first preference choice that respondents had put down when, incidentally the samples had been weighted in accordance to the firm’s standard party political ID weighting.

From this there are two possible lessons for current general election polls:

EITHER you cannot compare what’s going on now with what they did then because different processes were in place; OR that YouGov are brilliant pollsters able to tailor their approach to every situation.

Fellow punters – the choice is yours. I’d feel more comfortable if the current figures were in the same areas as ICM or Populus – the only two pollsters from 2005 who are operating now in broadly the same way.