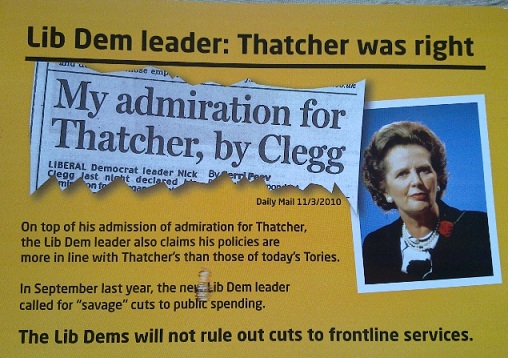 Being identified on both the Labour and Tory central databases as a Lib Dem in a highly marginal seat I’m getting a lot of attention from both big parties – this latest, an expensive postcard, came in the mail this morning.

Squeezing known LDs is clearly a key strategy but I just wonder whether this approach is right. To me it shows simplistic thinking which might look smart at Labour HQ but is not likely to have the desired affect.

For the way to secure switching is not by attacking the prospective tactical voter’s main allegiance. Rather it is to treat that choice with respect but to argue that the best way of of achieving a joint outcome in the specific seat is by supporting Labour.

The Tory appeal, by contrast, is focussed solely on getting rid of Brown.

If this is where UNITE’s money is going then I think that it is being wasted.