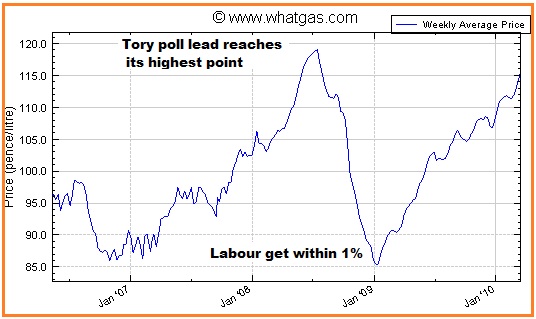 How will this go down in the marginals?

The lead story in the Telegraph this morning is a warning by the AA that the price of a litre could “within day” hit the Â£1.20 a litre mark.

This would make it more expensive than during the last peak in July 2008 which also coincided with Labour worst position in the opinion polls.

This was looked at here in a post at the end of December when I posed the question “What will this look like on polling day“.

An issue that I highlighted ten weeks ago is that not all constituencies are affected equally. For the English middle-sized towns, where many of the marginals are, private motoring can be a hugely sensitive issue.

For compared with the big conurbations itâ€™s in these places where public transport can be very limited that the motor car is more essential for every day life. Anything that makes motoring more expensive or difficult is politically toxic.

Here in Bedford for instance, which Labour loses on a 4% swing, bus services mostly pack up by 8pm and very few routes operate on Sundays.

Exhortations about the environment and car-use from politicians in public transport-rich London fall on deaf ears.

Expect huge pressure to be brought on the oil companies to stave this off until after the election.