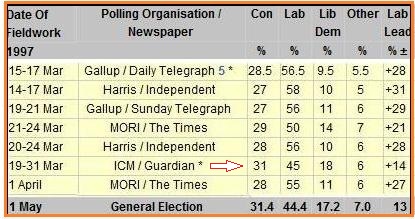 One of the phrases you hear time and time again about ICM’s polling is that it is “The Gold Standard”.

This came from its performance at the 1997 general election when it was wildly out of line with everybody else and ended up being proved right. Just look at the panel for almost exactly thirteen years ago ahead of the election that brought Tony Blair to power.

Those were, of course, the days of grand Labour overstatement in the polls when ICM was the one firm that sought to do something radical following the polling disaster five years earlier.

The answer devised by the then boss, Nick Sparrow, was something that I’m sure most PBers are familiar with – past vote weighting to ensure a politically balanced sample.

Sparrow, in tandem with Professor John Curtice, argued that the days when you could rely in standard demographic weightings were over.

The result was that the firm began producing figures that were so out line with the rest as can be seen above. In their pre-election poll the firm did something that was unique in all the pre-election polls at every single general election since 1987 – it understated Labour but still came top.

A question as we look at ICM’s latest output showing the biggest Tory share and lead is whether it is still “the gold standard” or has that mantle moved on to others?

Only a few more weeks to wait.