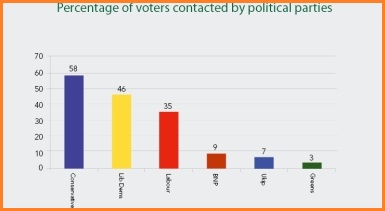 But could Labour activists now be more motivated?

In the next few weeks we’ll be seeing a lot of data about difference aspects of the campaign from the British Election Study – a big academic programme involving a number of universities and quite a lot of polling.

In this posting Professor Paul Whiteley writes: “The survey shows that about a quarter of the electorate have been contacted since July 2009, and the chart shows the percentages contacted by the different political parties. It is apparent that the Conservatives are way ahead of their rivals in contacting the voters, reflecting in part the effects of the funding provided by Lord Ashcroft. Even more interesting is that the Liberal Democrats came second in the list with a contact rate of 46 per cent, and Labour came a poor third by contacting only 35 per cent…. We know from research that such contacts have positive electoral effects, making this type of activity a vital part of the overall effort to win votes.”

Whiteley’s right – the more that local organisations are working on the ground the more likely it is that they’ve identified many of their potential supporters in a general election – information that is vital in tight battles when an effective GOTV (getting out the vote) operation can deliver several hundred or even a thousand or so extra votes.

A key determinant of campaigning on the ground is the number of councillors that each of the parties has. Incumbents are paid quite generous allowances which provides campaigning resources and they they’ve also got a close personal interest in furthering the prospects of their party in their particular ward.

But much of the BES survey took place while Labour was seriously in the doldrums and a general election defeat seemed inevitable. I wonder whether the recent closing of the deficit behind the Tories has given a boost to local Labour activists?

Finally the survey suggests that the Lib Dems are working hard in the seats that are critical to them and incumbents going to be very difficult to beat. In CON-LD clashes the squeeze will be put on Labour supporters to back Clegg’s party to stop the Tories.