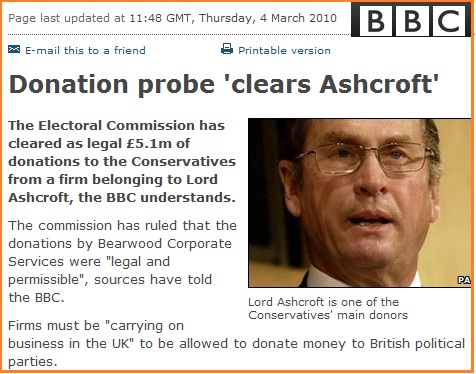 There’s been news within the past half hour that the Electoral Commission is to rule that donations to the Tory party by a company owned the controversial deputy chair, Michael Ashcroft, have been declared to be legal.

The body has been examining 173 donations totally more than five million pounds in the five years up to February 2008.

This will obviously help him and his party and take some of the sting away from the attacks. If the Commission had gone the other way it is hard to see how Ashcroft could have remained as deputy chairman.

But this move is only on one of the areas where he’s been under fire. There’s still the non-dom status issue and the circumstances of him being made a peer.

Whatever today’s move is going to make it a lot harder for Ashcroft’s detractors in the media and Labour and Lib Dem parties to sustain their campaign. In the public eye this is complicated enough and Tory spokesmen will simply say – “he got cleared”.