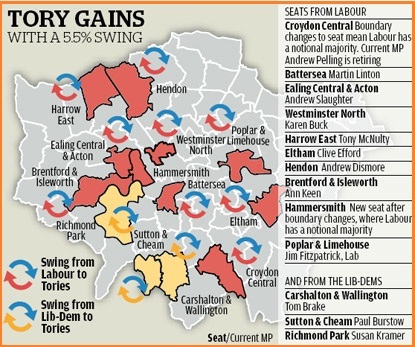 A new YouGov poll for tonight’s London Evening Standard suggests that the Tories might be on target to make a dozen gains in the capital at the election. The shares are above with the changes since the 2005 general election.

The swing of 5.5% is higher than that we’ve seen in national YouGov polls taken over the past week and suggests that the blues are doing a bit better here than elsewhere in the country.

What we haven’t got, and this might have been much more useful, is a breakdown of what’s happening in the key marginals.

Although this poll looks good in the current political context the swing is on nothing like the scale seen in the last YouGov poll of London back in April 2009. Then, in the immediate post-expenses and post-MacBride atmosphere the shares were 46-33-16.

So the Tories have slipped back a fair amount since then but Labour has only picked up 2 points.

It seems most of the Tory losses have gone to others – which I assume is UKIP and the BNP.

So not a bad poll for Cameron’s party but not a good one either.