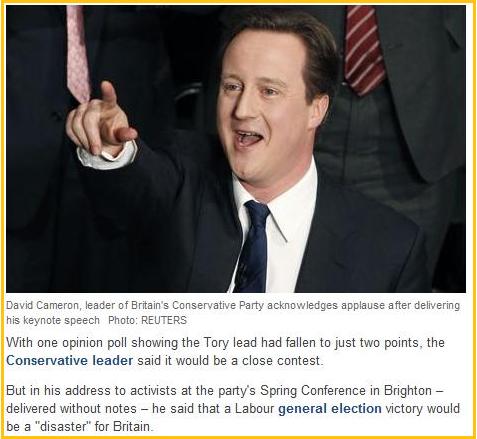 Will it settle Tory nerves after the narrowing polls?

With the opinion polls narrowing significantly in recent days, David Cameron gave what will be his final address to a Conservative conference ahead of the general election, telling his audience that:

“It is an election that we have to win because our country is in a complete mess and it is our patriotic duty to turn it around and give this country a better future… I think everyone in this country knows that another five years of Gordon Brown would be a disaster for our country.”

Will this go down as one of Cameron’s key speeches, on a par with the Conferences of 2005 or 2007? We’ll probably get a better idea in time, but early reaction has been generally favourable:

John Rentoul in the Independent: “…we should not underestimate him… The television debates during the election campaign are going to be even more important than everyone thought.”

Ed West in the Telegraph: “It wasnâ€™t quite Martin Luther King at the Lincoln Memorial, but it was good, and we are still looking at the next British prime minister.”

James Forsyth at the Spectator (Cameron’s Speech Delivers) “To be sure, the speech was not as good as the 2007 conference one. But it did the job which was to frame the election as a choice between Cameron and five more years of Gordon Brown.”

Janet Daley described the speech as “…very good indeed â€“ compelling, coherent and engagingly delivered…” but asks whether Cameron can hold his nerve, while James Delingpole, no fan of the Conservative leader, believes that the speech has “just won Cameron the election“.

The speech has had good coverage on the BBC and we await reaction from commentators in other leading media outlets. If the Conservatives do indeed hold on for an election win, will this speech come to be seen as the turning point where the party began the fightback, and put a difficult couple of months behind them?

The Election Game, covering over 30 countries, is at www.electiongame.co.uk