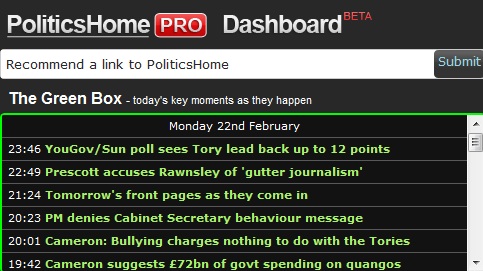 My apologies if I was wrong

All the previous header on the latest YouGov daily poll for the Sun has been deleted as a precautionary measure because I have no idea whether the poll numbers are correct or not.

I had based the piece, written in the early hours, on a posting by Tim Montgomerie on ConservativeHome who, I assumed had the correct numbers. For the chairman of the company that owns that site and a big share-holder is Stephan Shakespeare, the founder and now Chief Executive of YouGov.

My assumption, and I might have been wrong, was that there is a close link between ConHome and PoliticsHome, both under the same ownership and sharing the same offices, with YouGov so that when the figures were posted by Montgomerie I could rely on them.

Other sites, including the Spectator Coffee House blog, also picked up on the ConHome report. I have no idea what the correct figures are for they do not appear in the paper.

What we have is a cryptic comment by Peter Kellner saying “SO far the drama of the last 48 hours has not lost Labour votes. According to our YouGov poll for The Sun yesterday, voters seem to be giving Gordon Brown the benefit of the doubt. Just a quarter think the word bully applies to him…”

Is Kellner saying there that Labour’s poll share is unchanged? You can read it how you want.

But if this daily poll is to build up a credibility then a proper mechanism needs to be created to issue the voting intention numbers to sites like PB. I did raise this with both Shakespeare and Kellner before these polls started and I hope now that that can be put into operation.