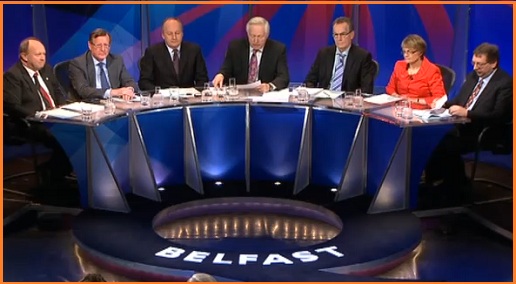 Could this be where power ends up resting?

(Anybody who watched last week’s Question Time from Belfast would have been left in no doubt about the complexities and continuing tensions within Northern Ireland politics. With all sorts of different developments that could have an impact on the UK outcome I’ve asked long-standing PBer, Yokel, to give us a run-down. In this first part he looks at the big picture – then in future posts he’ll examine the eight critical seats. Mike Smithson)

Itâ€™s a thought to make the chattering classes in GB shudder. Could the political parties in Northern Ireland really hold the balance of power after the next GE? The Unionists will likely back the Tories in the event of tight parliamentary arithmetic given that Labour hasnâ€™t done them too many favours. That wonâ€™t stop Labour trying though, despite the SDLP links, if the feelers put out to Lady Sylvia Hermon in North Down are anything to go by.

Until recently the eighteen Westminster seats were pretty easy to work out. This time things are more fluid, particularly on the Unionist side. Despite the DUP taking hit after hit, to profit from anotherâ€™s disarray you need someone to take advantage.

The Conservative/Unionist alliance (hereby known as the CUâ€™s) have not made the most of the opportunity thus far and has its own problems. Within Nationalism itâ€™s all about whether the SDLP can stem the Sinn Fein tide, hold South Down and prevent any Sinn Fein growth killing off Alistair McDonnell in South Belfast. The great unknown is whether Sinn Fein will suffer stay at homes with its own issues.

The DUP does face a possible squeeze. At one end is Jim Allisterâ€™s TUV who are only going to stand in some safe unionist seats (Allister wonâ€™t confirm where) and the TUV has the weakness of being somewhat a one-man party. (Jim is on the far left in the QT screen shot above).

A recent poll put it on 6% compared to the DUP 18%, CU 15% and PUP 3%. NI Polls are notoriously unreliable but the basic direction of traffic says the DUP have lost a lot of votes, yet the CUâ€™s are not really gaining, at least not across the board.

With TUV support fairly strongly concentrated, both they and the PUP wont be standing everywhere so it could cause the DUP a headache if the CUâ€™s gain votes in the right places. Then there is another possibility. Could a weakened DUP, a stronger CU and stay at home Unionists (a big danger) let Nationalists slip into some seats?

There are many unknowns, the current political process has twists and turns to come in the next two months and it is unclear exactly who the CUâ€™s are putting up as their PPCâ€™s. Much, therefore, could affect things between now and election time.

The current Westminster position is DUP 9: UUP 1: SDLP 3: SF 5. The spread on DUP seats on the Betfair party line market is currently 6.5 – 8.5 seats.

I will cover eight potential battleground seats in Part 2.