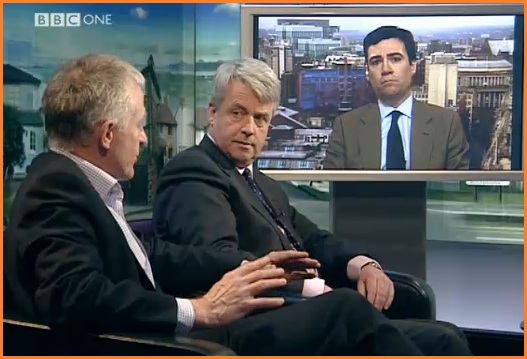 The programme brought together Labour’s Andy Burnham, Andrew Lansley from the Tories, and the LDs Norman Lamb to disucss the growing row over how we as a society fund long-term care costs for the elderly.

The has become the theme of a new Tory ad campaign which was raised by Cameron at the last PMQs and has clearly got Labour rattled.

The shape of the government’s response is now becoming clear – accuse Cameron’s party of negative campaigning and to set up a conference in the coming week of all the factions involved which the Tories are only allowed to attend if they take down the ads.

On the show this lunchtime (a must watch) Lansley responded to the negative charge by referring to Labour leaflets which were, he said, distorting the Tory approach. Burnham didn’t seem quite ready for that and floundered a bit. For the “going negative” charge only has potency if you have been completely clean yourself – and you shouldn’t do discussions like this unless you are properly briefed.

Burnham also made the mistake of taking part from a remote location rather than being there in the same studio. These things are so important that he should have curtailed his weekend and got to London so he could take part on equal terms.

What worries me about the Tory approach is that this is such a huge policy area that it leaves them open to the charge of trivialising the debate in order to make cheap points.

But hey – we have an election in a few weeks and it’s unrealistic to expect any faction to engage in serious policy discussion until that is over.