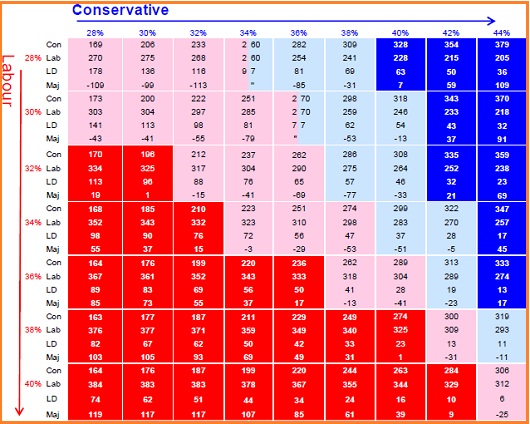 Will the markets gravitate again towards a UNS view?

The above is a chart that features in a recent Commons research paper based on what happens if there’s a uniform swing across all constituencies from 2005 election adjusted for the notional 2005 results because of the boundary changes.

So taking last night’s ComRes poll split of 40-29-21 the rigid application of the UNS formula has the Tories still short of a majority even though the lead is a full eleven points. Just compare it with the table produced by PB’s Andy Cooke which points to a majority of more than 120 seats.

And therein, I believe, lies a huge betting opportunity. For based on gambling patterns ahead of previous general elections it will be the strict UNS view that prevails, particularly in the final few days when high-rolling punters start taking an interest.

And if your view like mine is that the outcome will be more in the direction of Cooke then there’s the prospect of profits in almost the whole range of election markets.

In 2005 when the LAB>CON swing was mostly the result of Labour votes going to the Lib Dems the spreads finished up almost at UNS levels – with the Tory final price at about 182 seats – sixteen short.

The characteristic this time is that the Tory share is running a lot higher which opens up the dynamics outlined by Andy Cooke.

My plan is to defer my big general election bets to the final week when the opportunity for profits will be greater.