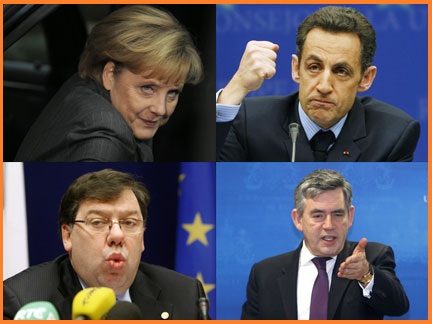 Can the government avoid the Greek debt trap?

After the recent EU summit, a reporter asked Gordon Brown if UK taxpayers’ money would be go towards a rescue package for Greece. He said, after a lengthy preamble that “the discussions at the moment are within the euro area”. Thatâ€™s very far from a denial.

The Greek governmentâ€™s funding crisis could spread to Britainâ€™s political scene rapidly in two obvious ways: if the UK forms part of a bail-out for Greece, and if the Greek situation becomes a full-blown crisis with the financial markets then turning negative on other countries running substantial deficits, as Britain is.

I find it difficult to believe that any British government facing a general election within four months – especially one staring defeat in the face – would put taxpayersâ€™ money up to support the Greek exchequer.

It would be an almost impossible sell to the public who were being told that cuts are necessary here. And yet, why didnâ€™t Brown just issue a straight-out denial?

So far, little more than warm words have come out of Brussels in support of Greece. Unless the European leaders are willing to risk Greece defaulting, that cannot remain the case. Without solid guarantees of some nature, Greece will find it very difficult to refinance its debt, at least, at an affordable price. The question is, who will give the guarantees and what will they have to commit to in so doing? We may find out soon – the EU Finance ministers meet on Monday.

The danger is that Brown does a bit of a Woodrow Wilson: putting the achievement of a resolution to the crisis above his being able to sell that agreement to his domestic audience.

Unlike Wilson, he wouldnâ€™t even have the excuse that his country was vital to the settlement – but in the confines of international conferences it would be easy to miss the wood for the trees.

The timing is also tricky for the government. It would be nice to put things off until after the election. Unfortunately, that may not be possible. Leaving aside the marketsâ€™ disinclination to work to politiciansâ€™ timescales, an unusually large proportion of Greeceâ€™s debt matures within the next few months. If the markets believe that the governments wonâ€™t solve the problem in time, itâ€™s quite possible that all the countries with high budget deficits will face a spike in borrowing costs.

Theoretically, that shouldnâ€™t affect Britain too much. The UK should have no problem servicing its debt, partly because itâ€™s outside the Euro and therefore has more flexibility and partly because of the much longer timescale of the debt profile. Markets, however, are not always rational and if one European sovereign default were to take place, a likely reaction on the markets would be to look for the next one and the one after. Real-world interest rates – the ones passed on to mortgage borrowers – could end up rising just as the election campaignâ€™s getting serious.

It will require delicate diplomatic footwork from Brown, Miliband and Darling to ensure that a solution is found that prevents Britain from getting caught up in the crisis (which really means preventing the crisis in Greece getting any worse), but which doesnâ€™t cost the taxpayer anything. If they can do it, the issue will become an esoteric financial matter of interest to hardly anyone; if they canâ€™t, it could be one of the biggest topics of the election.