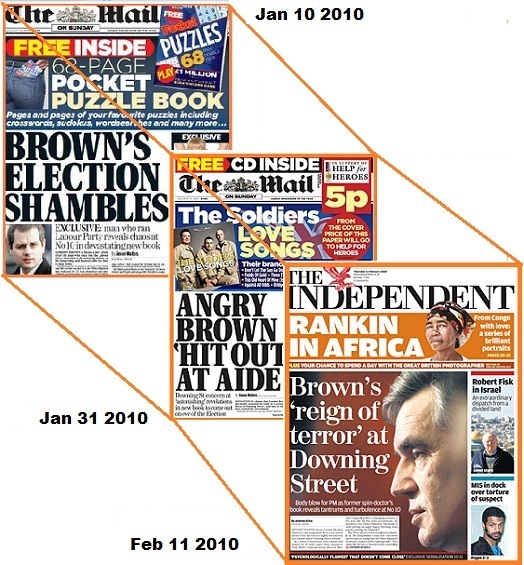 Something else to throw Brown Central off-stride?

Another day and another book looking at what goes on within Gordon Brown’s Number 10 written by someone who was close to the heart of the party and government.

The latest is by Lance Price, deputy to Tony Blair’s communications director Alastair Campbell and the first part of its serialisation starts today in the Independent.

One extract goes: “…When he believes a story is running out of control or that â€“ the worst sin of all â€“ the press office has been caught unawares, he can react with extraordinary flashes of anger. Stories of mobile phones hurled across the room in fury regularly appear in the press, although it rarely gets to that stage. Shouting at staff, jabbing an angry finger, throwing down papers, even kicking the furniture are far more common.

His behaviour towards relatively junior members of staff can be “unforgivable” according to one person who has witnessed it. “It isn’t a very nice place for people to work. However bad it sometimes looks from the outside, it’s far, far worse from the inside. And the atmosphere is very much set by him..”

My guess is that there’ll be two main consequences. Firstly Price just adds to the picture that we’ve seen in the Peter Watts book and the reports of what’s going to be Andrew Rawnsley’s. And that of itself is damaging and could be narrative changing.

Probably worse, the publication will do exactly what Price describes when bad news hits Brown Centrral – the PM could lose his stride and sure-footedness.

For Brown is very much a confidence politician and once that goes all the problems seem to be magnified – not a good state of mind at the start of an election campaign.

It’s been noticeable how little barbs based on earlier revelations have knocked him off-balance at recent PMQs.

And, of course, every news cycle that’s taken up with Brown’s management style is one less day when they can be attacking the Tories and putting the focus on Cameron’s policies.

Looking ahead the next big moment will be the serialisation of the Andrew Rawnsley book. This has already received fairly sensational coverage and will probably be more potent because of Rawnsley’s journalistic reputation.

I just wonder what this is going to do to the Brown exit date betting. My view had been that he’ll stay on for some time after the election. I wonder whether that will hold.