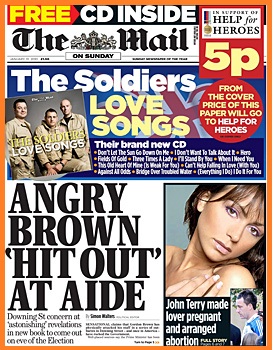 Is Number 10 trying to contain the Rawnsley damage?

Late last night the above front page figured prominently in the SkyNews review of the papers which is available online. A couple of hours later. as reported on the last thread, PBers linking to Sky found that the Mail on Sunday’s story had been taken down – see here.

Fortunately I had done a screen grab of the SkyNews paper review at 10.34 pm before that happened and that is what I reproduce above.

So what’s happened? Has there been a big operation to limit the damage from the story which reports that a new book by Andrew Rawnsley is going to make sensational claims that “Gordon Brown has physically attacked his staff in a series of outbursts in Downing Street – and once in America ….”?

Whatever the veracity of the allegations they are the last thing that the beleaguered PM needs in the run-up to a crucial general election – and who could blame his team from doing everything possible to limit their impact?

Brown Central’s influence does not seem to extend to the PoliticsHome site where, as at 0620 the front page was still featured. I doubt, also, whether it has impeded distribution of the printed version of the paper.

This is from the paper’s report: “Well-placed sources say the Prime Minister has been accused of hitting a senior adviser, pulling a secretary out of her chair and hurling foul-mouthed abuse at aides while distraught over an alleged snub by President Barack Obama.

The claims, which are fiercely denied by Mr Brown’s allies, are linked to a new book about Mr Brown by respected political journalist Andrew Rawnsley.

In researching the book, The End Of The Party, due to be published on March 1, Mr Rawnsley has investigated allegations that Mr Brown flew into a number of wild rages since he succeeded Tony Blair as Prime Minister. The publishers say his accounts are so detailed that readers will think he has ‘bugs in the vases at No10’.”

One of the problems with Brown’s style of politics is that you can make a lot of enemies on the way and often people don’t forget. The massive danger for Labour is that rightly or wrongly Brown’s character could develop into an election issue. The more there is to fuel it the worse it can get.