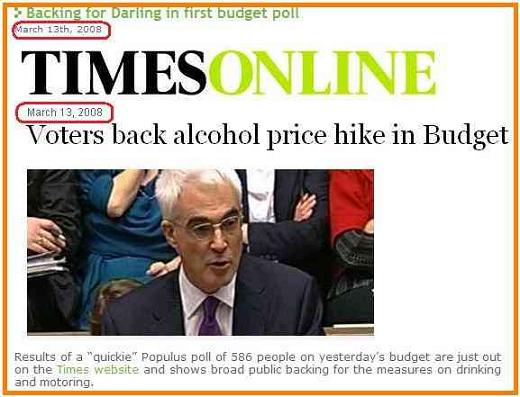 Politicalbetting.com – Thursday evening after the 2008 budget

Is instant polling reaction a guide to anything?

Every Friday after budgets, and now the PBR, the Times publishes the findings of a quickie small sample non-voting intention Populus poll and invariably this is good for the government.

But how seriously should we take it? Shouldn’t we look at the record.

I raised this one last March and I raise it again. The above is from the post published here about a Populus poll for the Times on the Thursday evening after Darling’s first budget in March 2008.

Like today’s survey the 2008 poll was broadly supportive yet within only a few days Labour started its dramatic polling decline leading to the awful summer of 2008. That collapse was sparked off by the budget’s failure to deal with the losers from the abolition of the 10 pence tax rate.

So what turned out to be the most disastrous budget in political terms during Labour’s twelve years of power was given the thumbs-up in the Times mini-poll immediately afterwards. Something’s wrong somewhere.

This morning we have a similar survey in the paper which shows, on the 2008 model, broad support for the proposals – but how will this look in a few days?

For the challenge is that in the immediate aftermath of such announcements the news agenda is about explaining what’s happening and not subjecting the strategy to detailed scrutiny.

I contend, that we have no real idea how the public will react. It might be more positive for the government or it might be a whole lot less positive.

Let us wait until we have a more considered response and see how that works out in the voting intention numbers. We have at least two of the big national surveys going into fieldwork today.

A little reminder to Populus. The detailed data on your December voting intention poll does not appear to be on your site yet. It was published on Monday evening – it is now Friday.