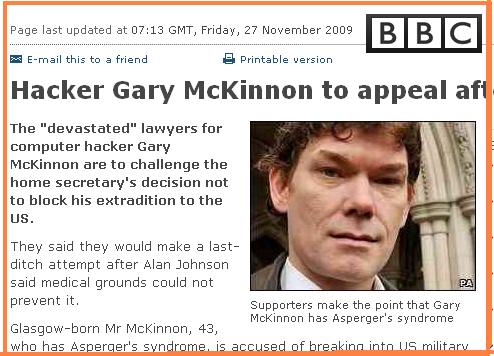 Could there be an electoral price to pay?

If the Radio 5Live phone in that I was listening to this morning is anything to go by then home secretary and former Labour leadership favourite, Alan Johnson, has provoked a mass of anger over his decision to allow the extradition to the US of hacker, Gary McKinnon.

He’s the man with Asperger’s syndrome, who is accused of breaking into US military computers in his search for evidence of UFOs.

Johnson’s problem is the new extradition arrangement with the US which at the time of it going through was seen as very one-sided.

Gary’s lawyers are looking at other avenues to stop the extradition taking place and whichever way that goes it’s now become a lose-lose situation for the home secretary. If Gary goes then Johnson is to blame – if the legal moves to prevent it succeed then Johnson looks foolish.

You can now bet on whether this is going to happen. The issue of whether McKinnon goes or stays is one of a number of political markets that a new betting exchange, Matchbet, is opening up.

Another is on whether Tory communications boss, Andy Coulson, will survive following the industrial tribunal case that has awarded one of his ex-reporters at the News of the World, nearly Â£800,000 in damages for bullying.

I think that Gary’s prospects are bleak but that Coulson will survive.