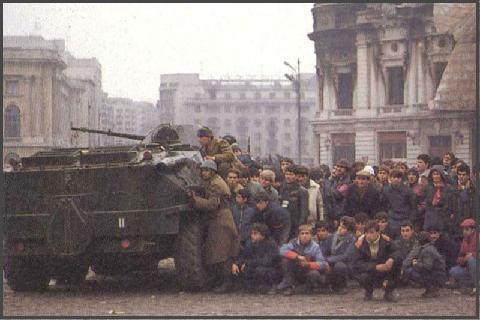 …is President BÄƒsescu about to be toppled?

Twenty years ago next month saw the bloodiest of the Eastern Europe revolutions of 1989, with the overthrow and execution of Romania’s leader Nicolae CeauÅŸescu and his wife Elena, and the takeover of power by the National Salvation Front, many of whose members had been communist officials. Today’s Romania is a very different place from its early 1990s counterpart, with the fledging democracy dominated by the NSF having settled down into a multiparty one, and the country having joined NATO in 2004 and the EU in January 2007 alongside Bulgaria.

Any toppling of leaders in Romania now is strictly through the ballot box, and the country holds one of the last few elections this year (including a clutch in Latin America around the start of next month), with the election for President taking place on 22nd November in a French-style second ballot system, with the runoff on 6th December if necessary. A President can serve a maximum of two terms, and cannot be a member of a party while in office. 22nd November will also see a referendum on changing the current bicameral parliamentary system (Representatives & Senate) into a unicameral one.

All the current indications are that current President Traian BÄƒsescu (formerly of the PD-L) faces a tough battle for re-election. BÄƒsescu’s presidency has been a rocky one, including being impeached by the parliament but surviving the subsequent impeachment referendum. The latest polls suggest that the President may just edge the first round with a vote share in the low 30s, but is set to lose the second round to Mircea Geoana of the PSD by six points or more. Of particular note in the second round polling is that BÄƒsescu trails every named candidate in the runoff, even the weaker first round candidates such as Antonescu and Oprescu who haven’t scored much above 20 and 10 percent respectively.

Romanian politics is famously volatile. Throughout the 1990s the Presidentâ€™s office alternated between Ion Iliescu and Emil Constantinescu while the 2000 poll saw the far-right Corneliu Vadim Tudor place second in a Le Pen-style electoral upset. Twelve months ago BÄƒsescu appeared to be cruising towards a comfortable first-round victory with the PNLâ€™s Crin Antonescu as his chief challenger. As the autocratic Antonescuâ€™s poll numbers have sunk, Mircea GeoanÄƒâ€™s electoral stock has risen.

Given the likely closeness of the election, both BÄƒsescu and GeoanÄƒ will be conscious of the need to tread lightly so as to avoid upsetting the ethnic divisions which still exist in Romania. With ethnic Hungarians comprising almost 7% of Romaniaâ€™s population, both candidates will be keen to tap into the remarkably cohesive voting block of Democratic Union of Hungarians in Romania challenger Hunor Kelemen with promises of increased regional autonomy and funding for the Transylvania region. Conversely, any overt â€œconcessionsâ€ to the ethnic Hungarian community by either candidate risks inspiring the ire of supporters of far-right candidates Corneliu Vadim Tudor (Greater Romania Party) and Gigi Becali (New Generation / Christian Democrat Party) who similarly command loyalty from sections of the Romanian public. Neither candidate can afford to alienate either voting bloc.

There don’t appear to be any betting markets for Romania, but Dan (of Brazil article fame), who knows a thing or two about international politics, has staked a reasonable sum on Geoana to win the election, and this looks like a sound bet. BÄƒsescu beat two of his current rivals (Oprescu in 2000 and Geoana in 2004) in elections for Mayor of Bucharest, while Romania’s legacy lives on in its current leaders – as BÄƒsescu said in a 2004 presidential debate, “You know what Romania’s greatest curse is right now? It’s that Romanians have to choose between two former Communist Party members.”

Special thanks to Dan for his insights on Romanian politics.