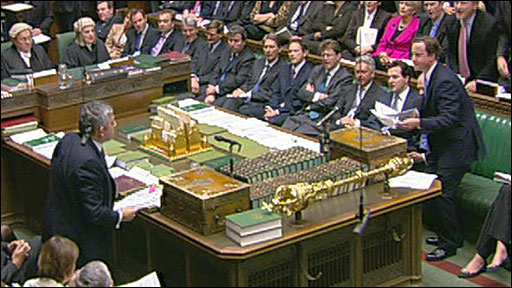 Expenses, Brown under pressure.Â Â It’s as if the Summer never happened.

So, the first PMQ’s of the new term and expenses is dominating the political agenda again.Â  Will either of the opposition party leaders choose to go on this?Â  It would be a brave callÂ to do so.

In other news, unemployment continues to rise but at a slowerÂ rate than some anticipated.Â  Could this be Brown’s favoured line to take the attack toÂ his ‘do nothing’ Conservatives?

Before any of the supplementary questions, Brown will no doubt pay tribute to the 37 servicemen who died duringÂ parliament’s recess – something that should prove aÂ sobering andÂ quieting effect on the sometimes raucous atmosphere.Â  Afghanistan will again be in the spotlight with Brown’s announcement on troop deployment there immediately after PMQ’s.