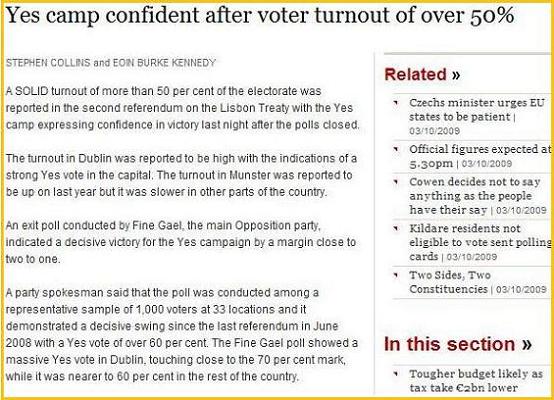 Live results thread – how accurate will the Fine Gael exit poll be?

Counting began at 9am in the 43 constituencies, with early numbers from the tallymen expected within the first two hours – these have been very accurate in previous Irish general elections and in the Lisbon referendum last June. We should have a very clear idea of how Ireland has voted by lunchtime if not before, and the final nationwide result is set to be declared at 5.30.

The Fine Gael poll (Ireland’s leading opposition party and virtually certain to lead the next government) was initially reported as a mere 52% Yes (and a contact of mine quoted FG sources with 54%) but was subsequently upgraded to 60% Yes – a huge difference if you are betting on the 5% bands – which set of numbers will turn out to be correct?