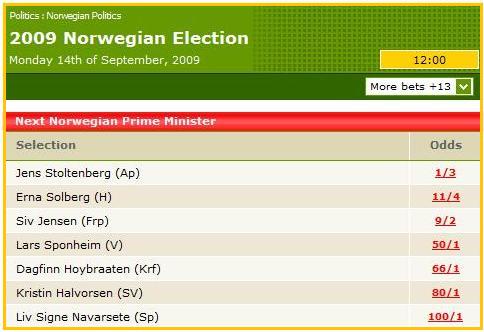 Yukio Hatoyama is set to be officially confirmed as Japan’s new Prime Minister this week, but already the international circus has moved on, and tomorrow will see the first election of the autumn with serious betting interest, in the shape of Norway.

The above market from Ladbrokes (such is the betting importance of Norway that the Magic Sign have a local trading desk) shows that Labour’s Jens Stoltenberg is a strong odds-on favourite at 1/3, ahead of Erna Solberg of the Conservatives (HÃ¸yre) at 11/4, and Siv Jensen of the rightwing Progress Party (Fremskrittspartiet) at 9/2, with the other party leaders firmly in the “no-hoper” category, while the market from Betfair is available here, with Stoltenberg shorter at 1/4.

Labour are set to be comfortably the largest party, and as such the main betting interest centres on the makeup of the new government and who the next Prime Minister will be. Polls released at the end of last week showed that the election was too close to call, with an even split over whether the centre-left government would retain its majority in the 169-seat Storting or not.

So, if the election is so close, why is sitting PM Stoltenberg such an overwhelming favourite to secure the premiership for Labour (Arbeiderpartiet) once more? Stoltenberg has traded between 2/5 and 1/4 on Ladbrokes recently, and has drifted to 1/3, but these are still skinny odds. The answer is to be found in the greater cohesion on the centre-left of Norwegian politics than the centre-right. Labour govern as part of the Red-Green coalition alongside the Socialist Left and the Centre Party (also known as the Agrarians), and this government is seeking re-election.

However, anyone tempted by the higher prices for the Conservative and Progress leaders must consider the relative disarray on the right, and the Wikipedia article provides a useful source of background. Unlike the three parties on the centre-left, the four on the right (in contrast to Sweden) don’t form a united front, with the Progess Party being the “fly in the ointment”, as both the “bourgeois parties”, the Liberals (Venstre) and the Christian Democrats (Kristelig Folkeparti) aren’t willing to be part of a coalition that includes the Progress Party – both of them would prefer to be part of a coalition with each other and the Conservatives, while Progress have said they won’t support a government that they aren’t a member of, and the Conservatives have called upon the other three parties to enter talks with them to try to form an alternative government on the centre-right.

Clearly, as in most “coalition countries”, the composition of the new government will depend on not just the election results, but on possible post-election talks between the various parties, and as this is the first Norwegian election I’ve followed in detail, I’ll be keeping my betting powder dry, although my gut feeling is that Stoltenberg will return as PM, even if narrowly, and at the head of a minority government, due to the situation on the centre-right – but if the current government doesn’t secure a majority, the post-election period will be very interesting to watch.

The election results for Denmark 2007 were a lot of fun to follow live on Danish TV, and I’m hoping to do the same for Norway – if anyone knows where there will be live streaming of results programmes, that would be very much appreciated. There’s a good write-up on the background to the election at the excellent World Elections site, while a walkthrough of the two-stage PR system can be found here. Official results will appear here after polls close tomorrow evening.