Two weeks ago, I introduced a new election forecasting model. This generated much heat, and a little light in the numerous comments. Many were scepticical, arguing that it used proportional swing, others asked how a model that produced such different results to Unified National Swing could be taken seriously.

Many of the criticisms came from a lack of understanding of how the model â€“ which weâ€™ve nicknamed Voter Intention Prediction Analysis, or VIPA â€“ works. This post explains why VIPA comes up with radically different results from traditional models, and why it is a fundamentally better way to predict results.

The two most common ways of predicting elections are the Proportional Swing and the Unified National Swing. Neither has a terribly good record, and both give trivially absurd results in many situations. To understand these systems, let us assume the Liberal Democrats got 20% at the last election and are forecast to get 25% now.

Neither method is perfect: proportional swing gives ridiculous changes to the number of votes to parties in seats where they already have lots of votes, while under-estimating changes in seats where they have little. With UNS, the issue is the opposite â€“ it will tend to over-estimate vote changes for seats where a party previously had little support (on an unadjusted basis and using current polls, it would suggest the Labour Party sees negative vote shares in much of the South East and South West of England.) Likewise, UNS tends to understate changes in vote shares in marginal seats.

The best way to demonstrate the failings of these two methods is to look at the chart below. It shows Lib Dem vote share in 50 randomly chosen constituencies in 2001, and charts it against the vote change in 2005. If UNS is correct, then the dots should fall in a fairly tight band between 1% and 5%. If Proportional Swing is correct then the dots should fall roughly on a curve starting off low, and then getting higher.

What we actually get is a mess: neither UNS nor Proportional Swing does a good job – although you might, and Rod Crosby will, argue that UNS was less wrong than Proportional Swing. What’s worse, and for both systems, the more marginal the seat, the worse the forecast vote share!

But what if there was a formula that gave produced a much more accurate forecast of the Lib Dem vote share? 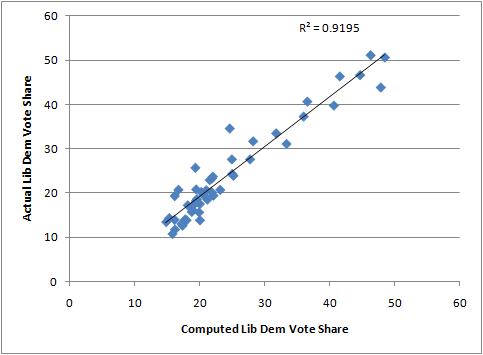 The VIPA model works exactly like this. It calculates each partyâ€™s votes â€“ on a per constituency basis â€“ by adding up switchers from each party. As such it comes up with much more accurate numbers than those generated by UNS or Proportional Swing.

Over the next week, Iâ€™ll be drilling down to a few important marginal seats â€“ and highlighting how the VIPA model gives very different results from traditional models.

The VIPA model can be downloaded here.