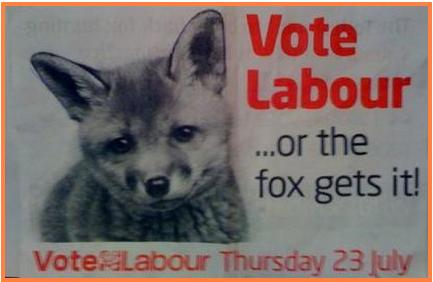 There can’t be many Labour supporters who were glad to hear that Ian Gibson had resigned forcing a by-election in Norwich North. They might not have been much happier at the prospect of fighting the SNP for Michael Martin’s old seat either. Both are potential losses for the Government, so it should be a case of finding silver linings.

The only benefit to by-elections where you can only lose or hold on (with no chance of gaining) is that they give you a chance to test certain messages and strategies – you can see what works and what should be avoided. It is, I think, the consensual view that the ‘Stop the Toffs’ campaign in Crewe & Nantwich was seriously misguided and ineffective. Lesson learnt, and better in Crewe than nationally, I suppose.

I was always surprised that Labour didn’t hold Glasgow North East and Norwich North on the same day – if both were lost, at least it is confined to a single news cycle; if one is held and one lost, you can limit the damage of losing a seat; if you win both, you’ve missed an opportunity to spread the good news over a couple of weeks, but you should be fairly pleased anyway. By separating them, I suspect they will endure a bad story this week, and still have the ticking time-bomb of another battle with the SNP during party conference season.

So what is to be tried? The ‘Toffs’ approach failed dismally, so why not try an approach on equality of opportunity, or schooling, or rural health services, or … no, surely not … foxhunting?

In a story broken by ConHome, the picture above apparently shows an official Labour flyer. I don’t know if this is a brilliant move, or the death knell of the Labour party as a campaigning organisation. It is possible, just possible, that foxhunting was a massive issue in Norfolk because of its comparative rurality. It is plausible that liberal Norwich, with its students and Green Party voters, was the epicentre of anti-hunt feeling. It might be that Norwich represents the front line in defence of the Foxhunting Ban, and that this issue exorcises political passions like no other. Maybe.

Or it could be a desperate, grasping-at-straws, wild shot in the hopeful dark. Find an issue, any issue, attach a cute animal to the poster, cite barbarism and Tory cuts, draw the battlelines, and hope to dear Heaven that enough Greens vote tactically on a very low turnout to put the result in the lap of the deities who don’t demand animal sacrifice.

Whichever it is, I think it’s a missed opportunity. Whether it works, or whether it doesn’t, this issue is at best regional, and isn’t going to be the basis for a national General Election campaign. Norwich North is a decent testing ground for such an experiment – a majority for Labour of about 6,000 over the Conservatives, with non-negligible Lib Dem and Others. This could have been the place to test out new slogans, and an innovative line of attack that (if successful) could be rolled out across the nation. Foxhunting ain’t it.

Glasgow North East is shaping up to be a good fight – Labour have selected a lecturer in law in William Bain, whereas the SNP have finally confirmed David Kerr, a BBC journalist, will be their candidate. Mr Kerr is a member of the Catholic prelature Opus Dei, which if Glasgow East was anything to go by, might be more of a help than a hindrance. I don’t know which way it will go,but of one thing I’m sure – the campaign won’t be about foxhunting.

UPDATE: Hat-tip to ‘Max’ on the previous thread, who identified that this slogan was used by Labour at the Eddisbury by-election held on 22nd July, 1999 – a decade and a day before this by-election in Norwich North! Credit for inventing the slogan was taken by Andrew Miller MP (Lab, Ellesmere Port & Neston) a few months later. Hansard trawling indicates that the only other mentions have both been by Jane Kennedy MP (Lab, Liverpool Wavertree), who brought it up twice, both times somewhat randomly, in the last three years.