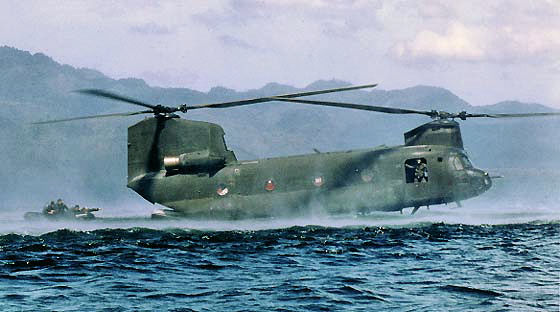 How can Â£20bn be justified without more helicopters?

The main story of the weekend is the ongoing row about how well resourced British troops in Afghanistan are, and what needs to be done to lessen the recent casualty rate. Sir Richard Dannet and Sir Jock Stirrup have both been widely quoted, and David Cameron and Nick Clegg have also piled the pressure on the government. The other defence story this weekend is the delay to the decision about Trident.

Afghanistan first: at the centre of this debate is the discussion of helicopters – how many are needed, which type, and why a more than half a batch of Chinooks delivered in 2001 are currently mothballed , and why helicopters are being constructed from the halves of crashed helicopters (I am not questioning the merit of so doing, just pointing out the perception issue).

The military top brass would like more resources, the Government cannot be keen to increase the defecit yet further but wants to avoid blame for mismanagement, and David Cameron has refused to suggest he would raise the Defence budget – focussing instead on waste (he cited Â£2bn being spent on the MoD itself).

Then the other story is linked to the first by none other than Nick Clegg. The Lib Dems now have a clear policy of not supporting a full renewal of Trident. Neither of the other main parties has followed this stance – indeed, in March of this year, Liam Fox MP made it quite clear that the Conservatives were unequivocal supporters of retaining a nuclear deterrent.

Apparently in the face of recent nuclear disarmament agreements between the US and Russia, the British Government has reportedly decided to delay its decision on replacing Trident until next year.

It seems to me that in current economic circumstances, profligacy won’t be tolerated by any department, and the response of many in the UK on hearing that ‘there is no such thing as enough helicopters’ will be split between those who would simply sign the cheque, and those who would prefer to withdraw altogether. Where I think both those groups would be united, however, is that if significantly more money is to be spent on Defence then for as long as British troops are still in Afghanistan, that money should go on helicopters, armoured vehicles, body armour, and protection against IEDs.

Trident wasn’t doomed by the recession – the nuclear deterrent is significant enough an asset that a case might have been made for protecting it from other cuts. However, spending Â£20bn of the Defence budget on Trident when there are apparently shortages in other operational areas will not go down well. I suspect that if the Trident decision is made whilst Britain is still in Afghanistan, that full renewal is probably off the table.