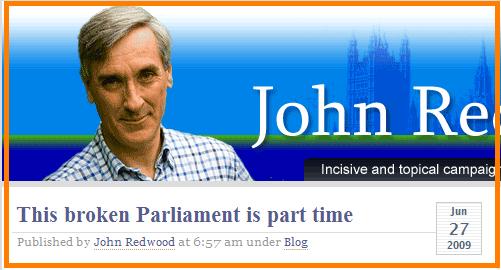 Why do they have seventeen weeks annual holiday?

Somewhat to my surprise I find myself in total agreement with today’s blog entry by former Tory minister, John Redwood.

In it he sets out just how little time MPs actually have to spend at Westminster because of the elongated holidays and the truncated working week.

He writes: “My main job is to hold the government to account. It is to cross examine them over their policies, to request they put things right that government has got wrong, to seek improvements to public services, to expose waste and maladministration, to criticise, amend and improve their laws, to approve or vote against their budgets..I am not allowed to hold the government to account in Parliament on Saturday or Sunday, as we do not meet, or on Fridays when only meet to consider private members business. Parliament is closed completely for 17 weeks of the year. In July we will be told we have to stay away until the second week of October!

That means, in total, we can only do our prime jobs for 140 days of the year. It is a part time Parliament…”

Of course unlike countries which have proper legislatures the commons itself is almost a farce. It’s barely more than an assembly ground for an electoral college that hands all power to the prime minister. The role of MPs is just to do what the whips tell them. If they fall out of line then the whips will see that their roles becomes even more limited and their chance of preferment is blocked.

The government completely controls parliamentary business and, as we saw in May, the confidence motion on the then speaker could not get aired without the agreement of ministers.

Of course there is so-called case week constituents but so much of that should not be handled by MPs at all but by councillors. All they do in the majority of instances is just pass it on to the local authority.

Given the new purge on MPs having second jobs you wonder what they are going to do with their time.

Surely this has got to change.