Keeping up with the site while on the move 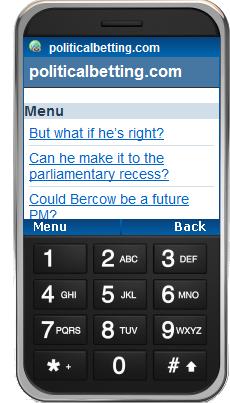 In order to meet the need of PBers who want to follow the site while on the move but might be worried by the cost of roaming data charges while abroad we’ve created PB Mobile.

This is a US-based service and it is configured for US users which is a tad irritating. It won’t send set-up instruction to non-US mobiles numbers and its way of handling comments system has a couple of frustrating features. But mostly it works well.

If anybody can see a way of working round this then please let me know.

On Wednesday we are taking the Portsmouth – Santander car ferry on our way to a hideaway in the wonderful sherry port of Sanlucar in Andalucia. We’ll be away for three weeks and I’m aiming to try to switch off from PB as much as possible – well almost! Morus will be running the show with able support from David Herdson and Paul Maggs.

I might just be tempted to post once or twice but I do need a proper break – which is why I’m taking my netbook with embedded 3G and chose an apartment with wifi!!

As we saw on Monday our new arrangements are quite robust and the site coped with the huge spikes of traffic during the speaker election. There is still a problem for some people who get directed to a cached page – the best URL to use is http://www1.politicalbetting.com. There are also one or two more tweaks that need to be made.

Thanks to my son Robert for his sterling work. No other political blog in the UK gets anything like the number of page-downloads as PB and keeping up with this is quite a challenge.

Thanks to PB’s donors

As regulars will know we mounted an appeal to support the site’s technical infrastructure in the aftermath of the local and EU elections. We received nearly 60 donations ranging from Â£5 to Â£500 and reached a total of Â£2,600. This has helped provide the resource to enable the extra capacity.

Many thanks to all those who have contributed. It is not only the extra resources that has been great but it has been really heartening to see how much PB is valued.

We are trying to find a way of saying thank you – one thought is to provide an “Early bird” email service for those who want to be alerted when a betting call is made. We know only too well that as soon as a good opportunity gets mentioned on the site then it does not last long. More on this when I return.