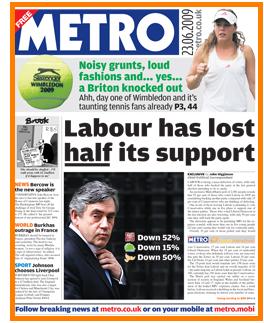 While many Labour MPs might be celebrating that “their man” won yesterday’s election for the speaker there’s a sharp reminder of the challenge the party faces at the election in a new Harris poll for today’s Metro.

The pollster which used to be one of the main firms in the UK has hardly been seen for years. The firm seems to operate online and is a member of the British Polling Council which means that it should follow the transparency code.

I have not seen the data but the paper reports: “An exclusive Metro/Harris poll of 2,081 people reveals that 52 per cent of those who voted Labour in 2005 are considering backing another party, compared with only 15 per cent of Conservatives who are thinking of defecting. One in ten of those leaving Labour is planning to vote Conservative while one in five plans to support one of the minor parties.

Overall, 30 per cent of those polled said they would vote Conservative, 17 per cent Labour and 14 per cent Liberal Democrat. When the 15 per cent of undecided voters, or those who definitely will not vote, are removed, this puts the Tories on 35 per cent, Labour 20 per cent, the Lib Dems 16 per cent and other parties 29 per cent.”

The paper says this would result in 158 Tory gains and an overall majority of 62 which is precisely the figure you get if you put the shares into the UKPollingReport seat calculator.

Normally poll findings are reported after the won’t say/don’t knows have been excluded and I find the 29% for “others” quite astonishing. I look forward to examining the detailed data and other aspects of the survey before coming coming to a conclusion because I need to get a handle on why Harris is reporting that this segment is attracting so much greater support than other pollsters.

The survey was carried out from June 10 to 17 which seems quite a long time.

Let’s hope that this will be a regular addition to the polling scene and let’s hope as well that Harris is as open about its methodology and data as other members of the BPC.