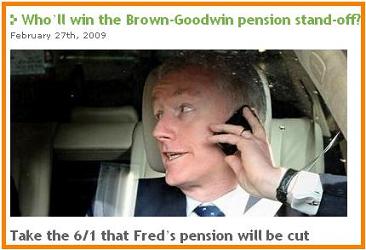 Is Fred’s offer good for Gord as well?

There’s a story running on BBC news that could be great news for those who bet that the Â£700,000 a year pension for ex-RBS boss Fred Goodwin would be reduced.

It would also be good news for the ministers who had made a big thing about the scale of the payment to the man who had been at the helm of the troubled bank during a critical period.

The report says that he’s offered to reduce his pension by Â£200,000 a year following a threat of legal action.

Having got Â£100 on at 6/1 I’m hoping that it might not be long before the terms of the bet are satisfied.