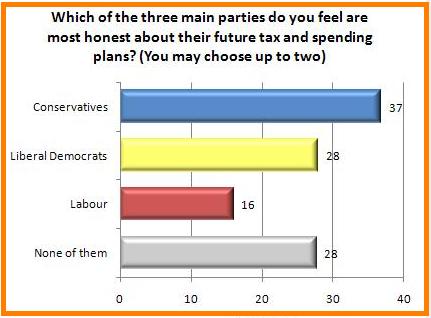 Does the party need to refine its approach?

With policies on tax and spend dominating PMQs and almost the whole political debate at the moment there’s a new poll out from PoliticsHome that could cause Labour strategists to re-think their approach.

To my mind the poll reflects the differences in approach between Balls/Brown and the chancellor Alistair Darling. Being believed is going to be critical if they are to have a fighting chance.

Given that this is going to be the key issue in the coming election Labour needs to find a way of putting over its position in a manner that is believed. I think the party is badly let down by Ed Balls.

PoliticsHome interviewed 1,295 adults by email between 15 – 16 June 2009 and results are weighted by party ID to reflect the UK at large. Although PH is not yet a member of the British Polling council they have been very ready to share with me details of their methodology and other aspects of their operation.